The International Spy Museum pulls you in with the lure of having a James Bond like experience, and then ends up giving you a detailed history of espionage. It's a bit of a bait and switch, but the museum is excellent and interesting nonetheless. I highly recommend it.

I find the admission price for the International Spy Museum a little steep: $18 for adults and $15 for children 12 and under. I've been spoiled by all the free museums in D.C.; These are not unusual admission prices for a museum in any other city. I was able to get two tickets for $9 each, plus a $3.50 fee from the discounted ticket web site Goldstar (www.goldstar.com). Tickets to the Spy Museum on Goldstar are available only for select days. I had to make my purchase a day in advance, but I saved $11.50.

As we waited to board the elevator from the ground level entry area, a statue of Lenin dangled over our heads. A plaque on the wall showed a photo of the same statue being toppled at the collapse of the Soviet Union. Cold war era exhibits dominate the museum, but exhibits from other eras can be found throughout the museum.

From the elevator we were escorted into a small theater to watch a short, interesting, and enjoyable film on espionage and spycraft. From there we were released into a room with many plaques bearing basic details of a cover identity. Another plaque instructed us to remember the details of one the identities. I've been to the Spy Museum a few times, and I've yet to find any other exhibit in the museum that asks me to recall the details of my chosen cover identity.

There are many artifacts of espionage in the museum, such as a chunk of concrete with an embedded listening device from the U.S. embassy in Moscow, and a German enigma machine for decoding orders to troops deployed during World War II. Some exhibits explain the skills and tools of intelligence gathering. Others explain significant or famous incidences.

The museum has a variety of interactive elements. We crawled through duct work to eavesdrop (on the other visitors to the museum?). We sat at computer monitors to analyze satellite imagery of soviet airfield and count and identify aircraft. Some exhibit areas of the museum recreate scenes, such as the Berlin Wall, checkpoint Charlie, and an American dug tunnel underneath the wall.

Finally, the exhibit area exits directly into a gift shop that sells many books, DVDs, gadgets, and toys. From the gift shop is an entrance the full service restaurant Zola, and across the entry area to the museum is the over the counter service Spy Cafe.

The International Spy Museum should interest anyone fascinated by the history of World War II or the Cold War. It is located at 800 F St NW in Washington, D.C. The nearest Metro Station is Gallery Place/Chinatown on the Green and Red Lines. For more information see the museum's website at www.spymuseum.org.
Sent from my Verizon Wireless BlackBerry

Posted by Unknown at 7:48 PM No comments: 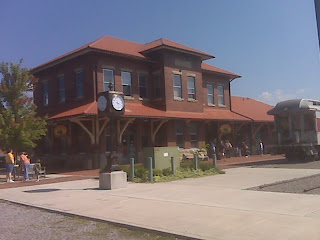 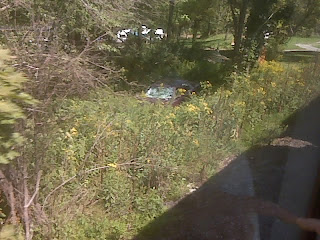 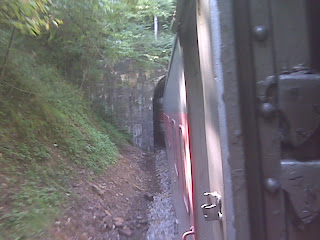 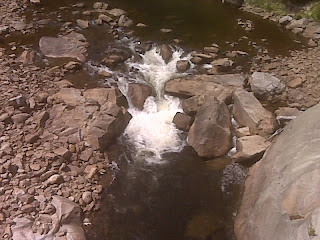 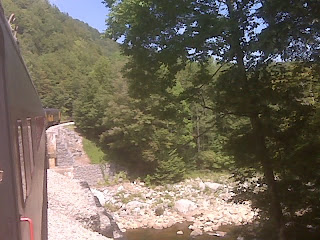 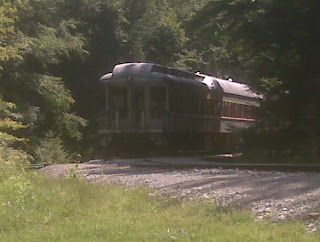 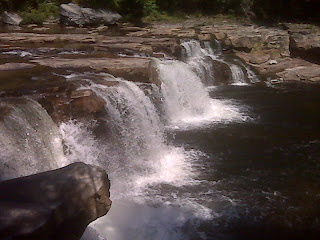 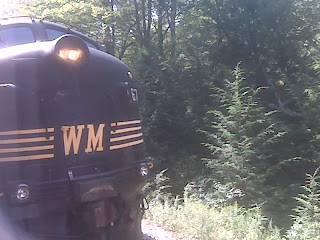 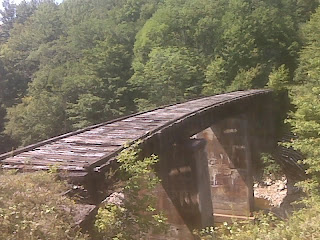 The route climbs through the Monongahela National Forest in the mountains and along the shallow Cheat River, passing through a tunnel, and by many campgrounds along the way.

For most of the route it follows the line of the former Coal and Iron Railroad that ran from Elkins to Durbin. An older man announced landmarks and told stories as we passed.

Lunch was served on board during the outbound trip: a buffet of potato chips, hamburger buns, cold cuts, pasta salad, and assorted drinks.

After an hour and a half of climbing, the train stopped and the two locomotives used a siding to move from the front to the rear of the train. Another fifteen minutes of climbing with the locomotives pushing, and the train stopped to offload passengers at a small shelter. A short walk downhill led to the High Falls of Cheat, a wide waterfall (the railroad's brochure tells me that it is 18' high, and 150' wide). The surrounding rocks there are slippery, as the boy discovered when he slipped, falling into a mud puddle. Not wanting my son to feel embarrassed for being the only one to slip and fall, I slipped and landed in the same mud puddle right after he did.

On the return trip downslope, we were treated to cookies and brownies.

The ride was fun. The train creeped up the slope on the outbound trip, but went faster on the return. The scenery was attractive mixing the natural with the historic. The food was nothing to get excited about, but we all appreciated being well-fed on a long trip over lunch time.

Elkins, West Virginia is a four hour drive from the Washington, D.C. area without traffic (which there won't be at 6 am on a Saturday when you leave to make it in time for an 11 am departure). The drive is very scenic through the mountains, and lots of fun if you enjoy winding mountain roads.
Sent from my Verizon Wireless BlackBerry
Posted by Unknown at 10:06 AM No comments: 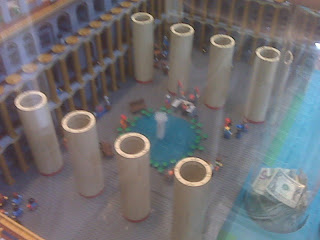 Exhibits at the National Building Museum seem to change frequently, which makes going there repeatedly worthwhile. 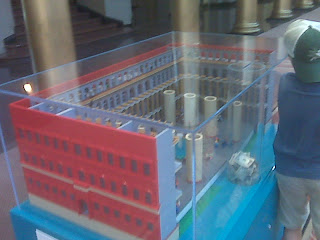 The boy and I enjoyed our June visit, and headed back there yesterday for the LEGO Architecture exhibit. This exhibit had an admission cost of $5/person, and admittance was timed. We arrived at 12:30, and immediately bought our tickets for the next available time: 2:00. 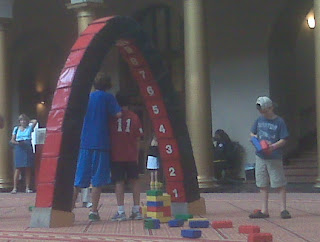 The wait gave us the opportunity to enjoy other features of the museum. The boy quickly made friends, and they got to work building an entryway sized arch out of large styrofoam blocks. I bought a cup of coffee from the Firehook Bakery kiosk, and enjoyed my lunch, and read some e-mails on my BlackBerry while seated against on of the large columns near the fountain in the center of the museum's atrium. 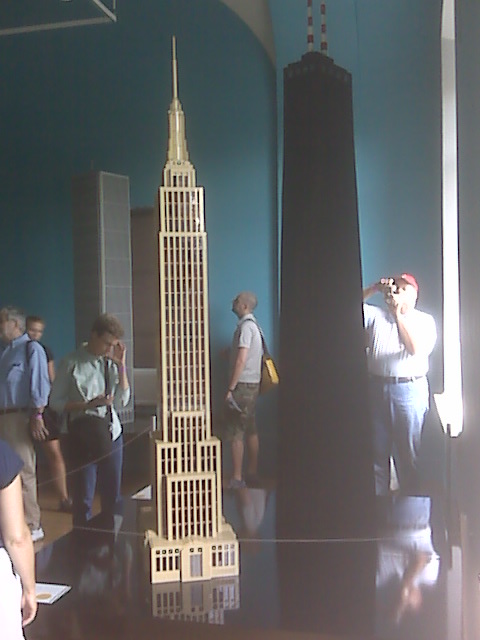 When it was time, we made our way up one of the sets of worn smooth brick staircases to a second floor exhibit space. The buildings on display are well-known landmarks. Mostly skyscrapers, and mostly from Chicago, hometown of the artist, architect Adam Tucker Reed. 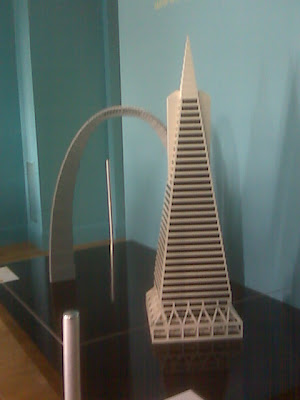 I was struck by how Reed had mostly used very small LEGO bricks to build his very large models. 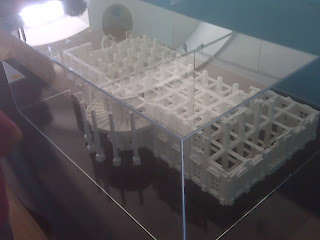 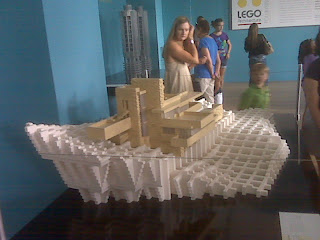 Beyond the exhibit space was a room with wide child height tables, and bins full of LEGO bricks. Inspired by what they had just seen. The kids got to work building towers. One particularly tall tower collapsed with a crash and the clatter of LEGOs bouncing every which way that momentarily silenced the room. The final room to the exhibit is a gift shop selling, much smaller, less detailed kits designed by Reed of a few of the buildings on display. 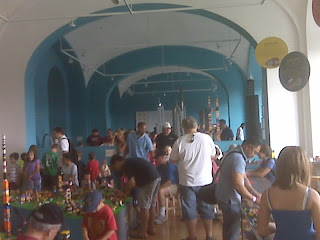 The LEGO Architecture exhibit will be at the National Building Museum through September 5.
Posted by Unknown at 12:46 PM No comments:

The end is near

Sitting in the last row of the last car of the train, the woman next to me asks which direction to the cafe car.
Sent from my Verizon Wireless BlackBerry
Posted by Unknown at 9:31 PM No comments: 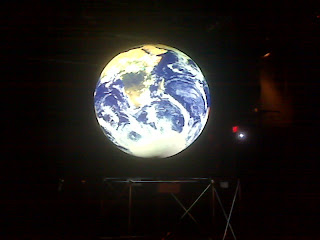 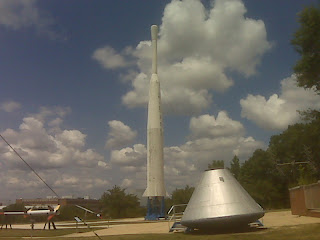 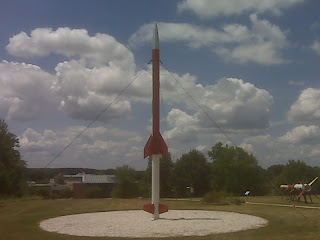 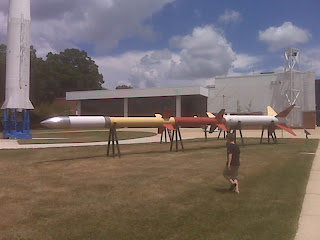 At entry, we were greeted by a notice that model rocket demonstrations were suspended until NASA receives a permit from the FAA to launch rockets in restricted airspace.

The center's exhibits explain the scientific significance of, and the science behind the programs conducted at the Goddard Space Flight Center: satellite and space-based telescope monitoring, and development of space exploration robots. Several of the exhibits are interactive, and some feature games geared at children. Several exhibits relate to satellites gathering data concerning the earth. Others focus on the solar system, the galaxy, and the universe beyond.

The visitor center features a theater with a globe-shaped screen at it's center. Four projectors shine onto the globe. The movie explains the work of NASA in general and the Goddard Space Flight Center in particular. During the course of the film, bright colorful images of the earth were projected onto the globe, as well other planets, giving this viewer the feeling of the planets from outer space.

Behind the visitor center, is the rocket garden where several small and medium-sized rockets are on display.

The NASA Goddard Space Flight Center is located off Greenbelt Road in Greenbelt, Maryland. The visitor center is accessible from the oddly named ICESat Road, which is the second entrance to the space flight center one passes when coming from the west.
Sent from my Verizon Wireless BlackBerry
Posted by Unknown at 1:26 PM 1 comment: 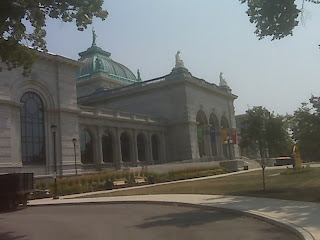 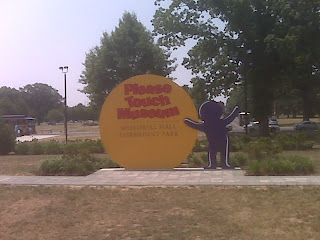 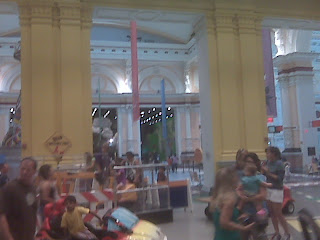 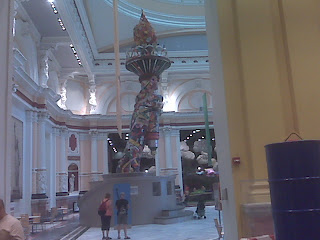 Philadelphia's Please Touch Museum is a children's museum with the most clever of names.

Please Touch is located in the beautiful, palatial, and historic Memorial Hall in Philadelphia.

It scores lots of points with this dad amongst children's museums for having lots of benches for tired parents to sit on.

Please Touch makes use of corporate sponsorships in a way I haven't seen at other Children's museums, and that I'm not so sure I am comfortable with. I'm accustomed to the signs that recognize the benefactor of an exhibit. Please Touch works sponsor's brands into the exhibits. The grocery store is a Shop Rite, the gas station a Hess, and there is a mock-up McDonald's. I found no other signage at any of these exhibits aknowledging the company that's logo appeared on the exhibit.

In addition to the exhibts just mentioned, some of the other highlights were a SEPTA bus, a mock-up of a monorail, a water play area, and an Alice in Wonderland themed maze and play area.

The final notable feature of the Please Touch Museum is century old Dentzel Carrousel in an adjoining pavillion. The boy declined the opportunity to ride the carrousel. I've never known the boy to miss the chance to decline a ride on a carrousel.
Sent from my Verizon Wireless BlackBerry
Posted by Unknown at 12:02 PM No comments: 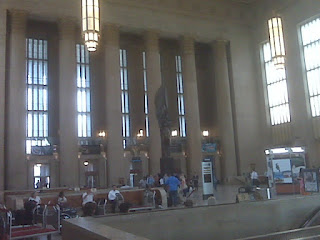 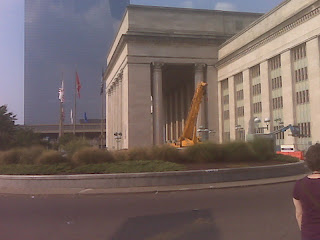 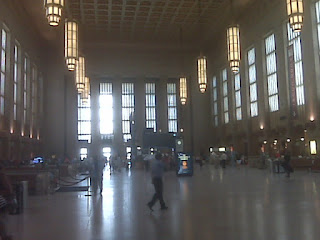 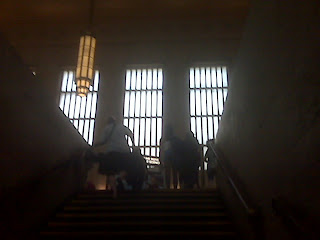 The high-ceilinged main hall of 30th Street Station is also a concourse. The gates are stairwells down to the platforms beneath the station that serve Amtrak Northeast corridor trains as well as destinations across Pennsylvania. There are several large wooden benches similar to those at Boston South Station throughout the main concourse.

The main concourse is dominated by a dramatic statue at one end of a winged angel holding a dead body. A plaque at the base of the statue reads:

"In memory of the men and women of the Pennsylvania Railroad who laid down their lives for our country 1941-1945."

On an earlier trip through 30th Street Station I remember discovering a waiting room off the main concourse that was dominated by a large dramatic painting. The details of that painting escape me now.
Sent from my Verizon Wireless BlackBerry
Posted by Unknown at 8:30 PM No comments: